On a clear day you can see Mt Fuji

But not, as it turned out, during our four days in Tokyo. This mega-city, Japan’s capital, was our first stop prior to a nine-day cruise around Hokkaido, the country’s northern island.

As we had a couple of hours to spare before we could check in to our Shinjuku hotel, we headed off for a quick look at the views from the 45th floor of the TMG Building – a popular city viewing site. Unfortunately, a haze of pollution obscured the horizon and Mt Fuji was nowhere to be seen.

As we soon discovered, there are not a lot of English or other language translations visible – in restaurants, on ATMs or on train maps. A bit like Australia’s mono-linguistic signage really.

Outside most restaurants though are photos and plastic models of the foods on offer, but it is difficult for non-Japanese speakers to know what the dishes contain. In our experience with restaurant staff there was little English spoken so it was a matter of point, shoot, and hope for the best. Trick or treat was the general rule, especially for us vegetarians.

What you can’t help noticing is that Japan is a country of vending machines. They are everywhere, along streets, outside shops and restaurants and as we discovered, on each floor of our hotel. From these we could buy snacks, drinks, beer, ice cream, you name it.

One restaurant near Shinjuku station featured a vending machine outside. Here customers selected dishes based on the photos next to each button. The technique is to insert the requisite coins, press an appropriate button and the machine will spit out a ticket for each dish. You then take your tickets inside and hand them to the wait staff. Incredibly, the chefs will have already started preparing your meal. I didn’t see a button for tips. 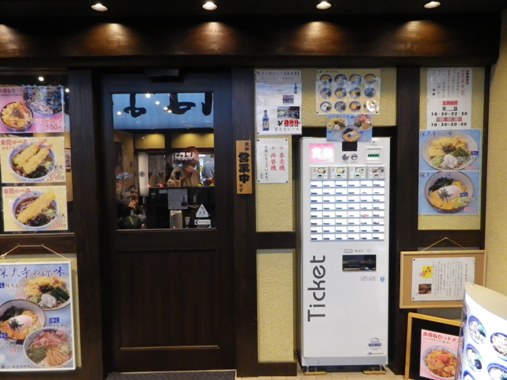 Pre-order meal with a ticket

If vending machines don’t offer enough variety, there are 24-hour convenience stores dotted around the place. Like their Australian counterparts they sell groceries and hot and cold snacks. Unlike Australia, they also sell a fair range of beer, wine and spirits. Croissants for the next day’s breakfast or cheap French reds for supper were our usual choices.

And in the basement floors of downtown department stores, the hungry tourist will find an amazing array of fresh produce. There is also a dazzling selection of food to go, for example, fried delicacies and plentiful supplies of sushi and sashimi. To wash it down there is usually a good wine section to browse through.

Next door to our hotel is the Minomi Chinese Restaurant, where they served us an excellent meatless Ma Po Tofu and an outstanding leek omelette. Their Szechuanese sesame and chili oil condiment was a real taste treat.

The New Uskudar Turkish Restaurant is situated near Shinjuku station. We had dinner here in their very small third floor room. As an entrée, they served a good peynirli pide with a garlicky spinach yoghurt dip, which we washed down with a dark Efes beer. There was a bit of confusion when we ordered a main of what we thought was vego eggplant kebab. It turned out to be meatball-laden. Quite tasty but we left the meatballs for the kitchen cat (if they have one.) 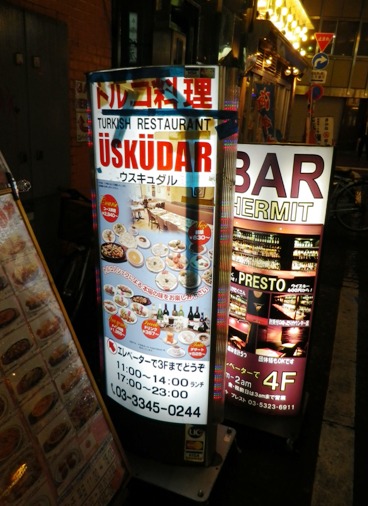 Saishokukenbi is a restaurant set in the grounds of a Buddhist temple near Okubo Station. The food is suitable for vegetarians and vegans; no alcohol is served. There are three set menus featuring traditional mock meat ingredients. The meals are presented on large compartmented glass plates, similar in style to Indian thali. Included on the side is a bowl of savoury miso soup; the price included a cup of tea. 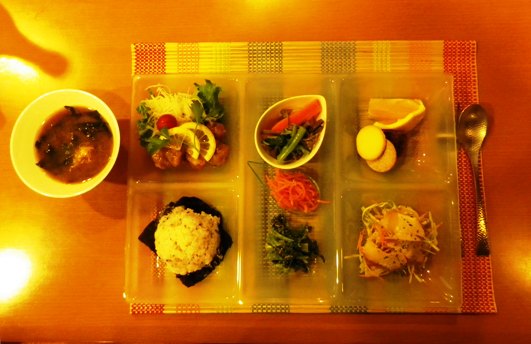 We tried the “A” and “B” menus. The “A” featured small slices of smoked “chicken” also a schnitzel shaped patty – a sort of chicken burger – with a piquant sauce. The “B” was similar enough, the main item being “chicken” nuggets with a sharpish lemon sauce. Somewhat incongruously, each plate came with a dessert of shortbread biscuits and fruitcake. The simple and delicious meal cost around AUD$27 for two.

The Shinjuku New City Hotel offered a small but comfortable double room. For example, there was no wardrobe, just hanging hooks on the wall, and the bathroom was tiny – but functional. Actually, multi-functional: it had one of those toilets with buttons and knobs and lights and such like. I was afraid to touch anything in case I received a surprise colonic grease and oil change. However, in Tokyo a room for around AUD105 per night is reasonably inexpensive.

A bonus was the hotel’s free shuttle bus, which runs to and from Shinjuku Station – we used it frequently.

To be continued. In the next issue we cruise around Hokkaido.