This piece was submitted by an old friend with whom I shared many of the experiences of a long gone Melbourne that he relates below. MF.

A late night visit to the father-in-law OBE (Over Bloody Eighty in his own words) recently was reason enough for him to demonstrate his renowned generosity. One attribute in short supply is his ability to differentiate a good wine from a bad one. None-the-less, he always has a couple of bottles in his portmanteau on any visit.

My arrival at his house was quickly followed by ‘Can I get you something?’ Being midwinter in Melbourne, I suggested a whiskey. ‘I might have something,’ he rejoined. ‘Would a port do?’ 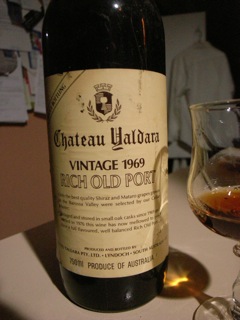 ‘Where did you get this’, I asked.

‘Oh, I had some guests over and one bloke had a case of these he had re-found. Didn’t know if it was any good or not. Should we give it a try? Probably rubbish.’

Well, here was the surprise. You know how scent or sound can evoke locked memory? It was all in a bottle, the essence of 1969.

Old scenes flooded back. Poppa’s, the second only pizza parlour in Toorak Road, complete with a screen with words to the old English pub music and a ping-pong ball following the beat so that the patrons could keep up. The Thumping Tum discotheque in Little LaTrobe Street, the first in the big city. Maisies [Her Majestys Hotel] down at South Yarra, when it was just a convivial but boisterous watering hole. Footy. Car rallies in the new expansive parking areas of emerging shopping malls. Going for a ‘test drive’ with Peter Brock around the streets of Nunawading.

Parties in every nook and cranny of the city, upstairs and down, where returned travellers [from London] brought a flash of Carnaby Street and the exuberance of the changing world back home. Huge red and white wines they called Claret and Chablis, Fergussons winery and the Baron of Beef. Beatles, Stones, Troggs, Floyd, It was all there in the bottle.

When I went to see Pa-in-law a couple of weeks later, I inquired about the elixir from the TARDIS. He looked bemused, and slightly uncomfortable. ‘It’s all gone,’ he said. But I did notice in the following weeks his predilection for old war films and docos, and a surfeit of stories from his navy days.

I dips me lid to the old gent and Chateau Yaldara just for being around, robust, pleasurable and interesting after all this time.