“They also serve who only stand and wait.” John Milton said that.

Well, I was serving and waiting but as I quickly discovered I was in a definite no standing zone.

Of the many jobs I’ve had, waiting in a restaurant wasn’t one of them. How hard could it be? I asked myself.

So I’d asked Ipazzi restaurateurs Ruby and Fabio if I could observe and help on the restaurant floor for an evening. Foolishly, I thought, they agreed.

First off, I helped set tables and learned the table numbering layout.

Then I thought I’d be a kitchen hand for a bit and hung around backstage as Fabio prepped and created sauces for the evening rush.

The industrial-sized stove radiated what seemed like megawatts of heat, and what with chef Fabio flaming away with juggled frying pans and all, and despite the extractor fans sucking like a reverse steam locomotive, I found it too hot. So, you guessed it, I got out. 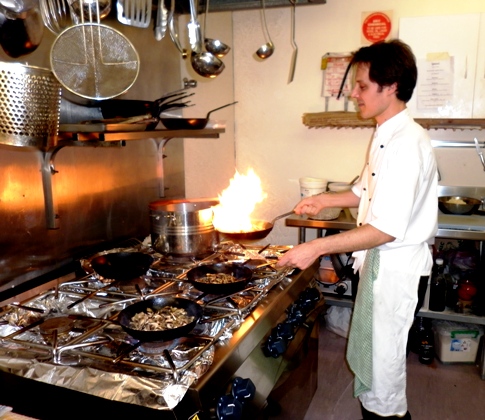 Too hot for some

Friday night, about half the tables were booked, and it looked to me disappointingly quiet. Then, over a short space of time, booked guests and walk-ins arrived in a rush and all the tables were full.

Suddenly I was showing people to their seats, pouring cold water, beer, wine, handing out menus and trying to pretend I was a waiting professional.

Fabio was dishing up the food as fast as we could serve it. The kitchen, which earlier I had found sauna-like, became hotter. Yet strangely, the service kept purring along like a well-tuned V8.

One major difficulty with table service was that Ipazzi is not like some Noosa restaurants that have a slightly formal air about them. It is more like the family run Italian restaurants I was familiar with in Lygon Street Carlton for so many years. The clientele treat the staff as family. They want to chat.

People kept asking Ruby about eight-month old Luigi  – who sleeps peacefully through the mayhem in an alcove behind the scenes.

Diners asked me where I was from. When I mentioned a wine background, they started telling me their wine anecdotes. It quickly became apparent that I would have to balance chat with work if everyone was to eat in a timely way.

Back in the kitchen, Fabio was a dynamo of nervous energy. Bopping to an internal iTunes player, he did the kitchen two-step as he skipped from stove to plate up, each move synchronised with the order of service. Not a move wasted, not a drop of sweat, not an angry gesture, never a harsh word, and no swearing.

Slowly the entrees, the mains, the desserts and the booze disappeared and soon after, the guests.

No time to relax. Dishes had to be washed, floors to be mopped, tables to be re-set and the kitchen organised for the following evening.

But at last we sat down outside for the staff dinner, a bottle of sauvignon blanc, a bowl of gnocchi here, a four-cheese pizza there and chat about how the night had gone.

I hadn’t dropped anything, or delivered the wrong meal. Nobody had guessed it was my first and only night as a waiter, and one lady commented on my professional service.

Although I’ve eaten in numerous restaurants and seen innumerable cheffy TV programs, they were nothing like the real thing and I was left with a new respect for waitstaff, chefs and front of house operations.

Did the experience inspire me to look for a new career as a waitperson? Nope, too hard. I’ll stick to dining.