About 10 years ago I brought winemaker and blogger Iris Rutz of Domaine Lisson from the wild hills of the Languedoc to the Slow Food fair in Turin, where I presented a workshop on what I then called “wild wines” from France. It sounds better in French: vins sauvages. I wanted to convey that these were indeed natural wines, while avoiding the pitfalls of the “natural wine movement”: the sectarian connotations of this fractured movement, the frequent correlation of “natural” with “drink young”, and the strange tastes of many natural wines. 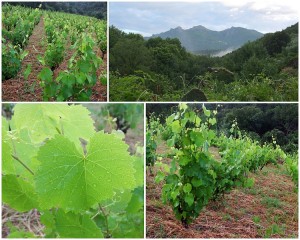 The vines of Domaine Lisson, Languedoc

Iris Rutz makes impeccably clean long aging complex wines using traditional methods in the vineyard, with sulfur and, in very difficult years, some copper. In the cellar she uses minimum sulfite levels (these are marked exactly on the labels), with no filtering or fining and 18 months of barrel aging. Another winery that works its wines with a light hand, and yet the wines age beautifully, is Dupéré Barrera in the hills of coastal Provence. They also participated in the Turin workshop.

Iris Rutz adds two other aspects to her winemaking that, in my judgment, truly qualify her for the “wild” label.

For one, her winery is not connected to the grid, all her electricity is home-grown from solar PV panels and used for the most basic functions: lighting, and… blogging! She is possibly the only person in the world who has a broadband ADSL line but no 240V AC mains! Hence, no hot water at home, no refrigeration, no technology in the cellar… but a permanent presence on the web and social networks! Facebook on batteries…

Second, nothing she does (solar panels, electric fences on batteries, optical and noise devices of all sort, even the local hunters…) can protect protect her vines from the increasing population of pig-boar hybrids irresponsibly bred by the same local hunters for game; this is a large pest that has multiplied out of control and can destroy farm production (or completely tear up your garden in a few minutes). Iris declares herself happy when these animals eat only 80% of her grapes… 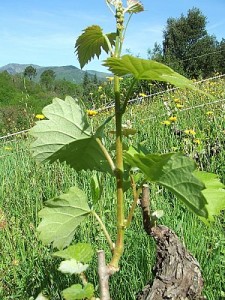 While in most years she manages to make ends meet, she is finding this year very tough, so this article is in fact a cry for solidarity from us wine geeks to go out and stock up on some of these “heroic” wines, to make sure that they continue to exist for many more vintages.

The unique aspect of her wines is that they are “natural” yet made for aging: she is committed to making wines that will survive non-refrigerated logistics, and that will not only keep well, but actually evolve positively after years of cellaring.  A Mourvèdre from Domaine Lisson will need at least 6 years in the cellar before it develops some of the marvelous bouquet that my older bottles have developed.

Most winemakers in the lo-sulfite natural trend have a tendency to make wines to be drunk young: most of their wines will not keep, and if you do cellar them they will rarely improve.

In the “natural” wine world (as in conventional wines), the really good ones tend to be a minority: thus the wines of the likes of Iris Rutz, Francis Boulard, Angelino Maule and a few others are memorable exceptions. On average, natural wines are fairly disappointing, whereas, on average, conventional wines can always fall back on technology to produce a wine that is at least decent. So it appears that the natural wine movement is, for some, a marketing crutch to fall back on to compensate for lack of true winemaking skills.

I have always maintained that the natural wine movement lacks a coherent definition of what it means to make “natural wine”, and that in a world of declining allegiance to the truth, a self-certification by the winemaker stating that he follows the unwritten law of naturality is not only doubly specious, it is meaningless and even, logically, laughable. Some winemakers in the feuding factions of natural wine do not use methods that can be described as natural at all, but they claim they do. A more significant number of these winemakers may have a very small parcel of land that they dedicate to making a minute quantity of wine that can be described as natural, in order to surround themselves in a general aura of oenological sanctity that in fact does not apply to most of their production, but leaves the line between the two deliberately fuzzy. And finally one must say that a great majority of the natural winemakers make wine that is not particularly good, they simply lack the skills to do so, but hide behind post-modern claims that all wines are good, that it’s the palate of the wine drinker that needs to change!

I have also often repeated that if the naturals cannot get their ideas together on paper and create a credible certifying body, they should at the very least get certified as organic grape growers. The fact that many refuse to do this is indicative of their questionable intellectual coherence and their inability to follow any rule, even the watered down ones of organic growing.

Iris had applied for organic certification in 2001, but let it lapse when she realized that the cost of maintaining it did not make sense for her, and besides she did not feel like being examined by young bio-administrators. Her production is small and her customers know her personally, so they have witnessed the “heroic” viticulture she practices, it serves as a good enough guarantee.

Thus in a way I am contradicting myself, by saying that you should not trust a winemaker to be doing as he preaches, and then recommending Domaine Lisson on trust. But Iris does not preach at all, she does not proclaim herself to be a model or a guru for anyone, she just makes wine in absolutely unique conditions that few would be able to endure for a single growing season. She is the exception that “proves” the rule – in the etymologically and logically correct sense of “challenging” or “testing” the rule.