This article is by occasional contributor Geoff Parker – Geoff looks at the history of a well-known Australian wine and seeks the origin of the name on the label.

A value for money, commemorative release

Some years ago, the local bottle shop in Blackburn had on sale a magnum of Koonunga Hill Shiraz Cabernet 2004, for the good price of $21. It was called Koonunga Hill (Special Reserve) Claret. The entire bottle was covered in red, and the distinctive appearance commemorated the passing of thirty years of the line. The first release was the 1976 vintage which was released in 1978. I bought the magnum and reflected, “Where have the thirty years gone?”

There was a bottle of the ‘76 in my cellar at this time, but somehow it got included in a parcel for auction at Langton’s and ultimately realized $25. I should have kept it. With the magnum in my hand and thinking back to the label of the ‘76, it struck me that I’d purchased every vintage in between, and for good reason. 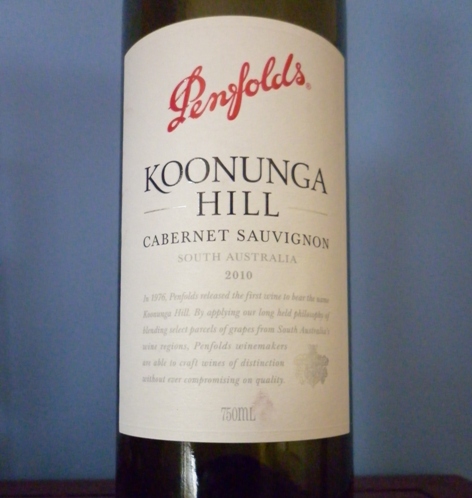 Koonunga Hill was always a reliable, very affordable, quality red that you could freely splash about after a game of golf, or when neighbours dropped in, or when a pizza at the local Italian was a good idea. But treating it in this way was probably a little too casual, particularly during the early years, for as Len Evans said of the first release in the Wine and Spirit Buying Guide of June 1978:

“Koonunga Hill is “…very big on the palate (with) an underlying complexity which I find most appealing…reminiscent of the big Penfolds reds of the 1960s.”

Now at face value that looks for all the world like the recipe for Grange Hermitage. However, the style of Grange can normally be distinguished by its more wooded and lifted sweetish palate, its greater depth and length, and by its more evident volatility. Nevertheless, the youthful Grange and the youthful Koonunga ‘76 were not far from each other in style and cellaring potential.

This spelt trouble, as the similarity in style aroused some wine journalists to the point of apoplexy.

As it turns out, I was a witness to an attack on Grange, as a guest at a Wine Press Club lunch at the RACV Club in Melbourne, shortly after the release of the ’76 Koonunga. The guest of honour was Max Schubert, the ‘Father of Grange’, and the wines that Schubert presented for our enjoyment and evaluation were all the vintages of Bin 389 released up to that time. At the end of the tasting, he invited questions from the floor.

“Is it true” one journalist asked, “that Koonunga Hill Claret is in fact Grange Hermitage with a different label?”

Schubert, in his measured and cautious manner, replied that the integrity of both Grange Hermitage and Koonunga Hill were guaranteed, and that only premium material was sourced for both. Maybe not a satisfactory answer, as the journalist took to his seat and stared at the ceiling, nevertheless it fits the official version that Penfolds offered 16 years later in their 1994 edition of “The Rewards of Patience”.

In this, they state that the Koonunga Hill vineyard, when purchased in 1973, was intended to produce fruit for their high end Bin numbers. However, at this time, its fruit was not introduced to this level, as a consequence of falling demand, and of course, this decline must have included Bin 95, Grange Hermitage.

Whatever the true intention was in creating the Koonunga Hill label in 1976, the result after 36 years is a brand name that represents quality, reliability, availability and value. Perhaps it was meant to be a one off; a temporary hedge for its bigger brothers, but then the best of plans can be easily shot down when success gets in the way.

I would have liked to have asked Schubert if he knew what Koonunga meant, and indeed if his company had any policy in regard to the use of  indigenous language on their bottles of wine. And I’m sure he would have responded politely in mission statement terms, but in all fairness, this was not a subject that that would have seriously involved him.

My efforts to find out the meaning of Koonunga have failed. There appears to be no relevant internet reference, and the word doesn’t appear in the book, ‘Macquarie Aboriginal Words’, where the language of the Kaurna people of the Adelaide Plains is described.

For ‘Koonunga’ it is not known whether it is an Aboriginal place name or not, however, the ‘unga’ is derived from the locative case-marker ‘-nggn’, which strongly suggests it is. Also, it is unknown whether the term was assigned from one area to another as a commemorative name, a practice that was not uncommon with house and farm naming in the nineteenth century.

The possibility then exists that ‘Koonunga’ is a relic of a mnemonic system that belonged to the Kaurna people, and as such should be respected for what it may be, and acknowledged as such on wine labels or wherever else it is publicly displayed.

On the question of corporate conduct in assignation of indigenous language, I believe that every effort should be made to establish the etymologies of any indigenous term proposed for inclusion in public domain activity, such as, in business names, or product names and marketing.

I wonder if Penfolds would consider a few carefully chosen words for inclusion on their wine labels in cases where Aboriginal language is used to enhance their products?

I would raise a glass of Koonunga Hill to that…